We had another fabulous weekend.   Hey, what can I say, we enjoy each second together!!!  This weekend was full of bike riding, a few errands, lots of time together and some choices.   So much happening!
Choices
Last weekend I decided to splurge and get a chic fil a milkshake on Saturday.  Those things are so tasty!    They are also ungodly high in calories.  Last weekend I also had a cookie from Jimmy Johns on Friday and a cookie for Jersey Mike’s on Sunday! (Both are sandwich/sub shops) Honestly, I should have been ok.  I burned mad calories with the biking.  But...I didn’t drop weight.   SO...this weekend I made some tough choices.   On Friday night of this weekend when we got subs from Jimmy Johns ...I did NOT get a cookie!  On Saturday when Jason got a milkshake...I did NOT order one!  I made the choice to not blow that many calories!   I did make myself a small batch of edible cookie dough and I thoroughly enjoyed that....with far fewer calories!!!   Will it have the desired affect?  This upcoming week will tell on the scales!   But, choices  were made and I am happy with my choices!!!
Relaxing
How in the world have I made it to this age and never seen the Rambo movies?   Especially since it is based after  a book by one of my favorite authors.  Well this weekend I began my induction into The Rambo movies.   Yup, I’m way behind the times.  But we enjoyed relaxing on the couch together.
Saturday bike ride
On Saturday we went out to the ‘hard’ trail that I have no emotional problems with and that I rode last weekend.  Yes, it was still tough!  But I did it...and I can slowly see improvements.  Slow.  But there are signs!   It was not a bad ride at all!
Sunday and the Trail of Tears
Riding high on my successful rides on the Little Bennet trail (the trail and park we have been riding the last few rides) I decided to give the lake trail that I have been totally dreading a try on Sunday.   Jason has been REALLY anxious to ride this trail.  I could certainly do it...right?  I had a blast  all morning giving Jason grief and talking about how I was heading to the death march...yes like a Nazi prisoner of war!   Oh, I had the comments and loved every second of laughing about it.   After all,   I was SURE I could do this trail!
We started out and immediately and I was shocked!   The trail starts with a hill right out of the gate.  Last year I had to walk it.  On this day, it was...dare I say easy?    My legs burned here and there as we got going but I wasn’t too miserable!  In fact, it might have been a wee little bit fun!  (I know...kinda shocked me too.). It started to get hard though.   Seriously...that trail is all climbing.  Climb and then 3 seconds of downhill bliss and then back to climbing.   I never had enough time on the downhill for my heart rate to slow down...it was beating like crazy! 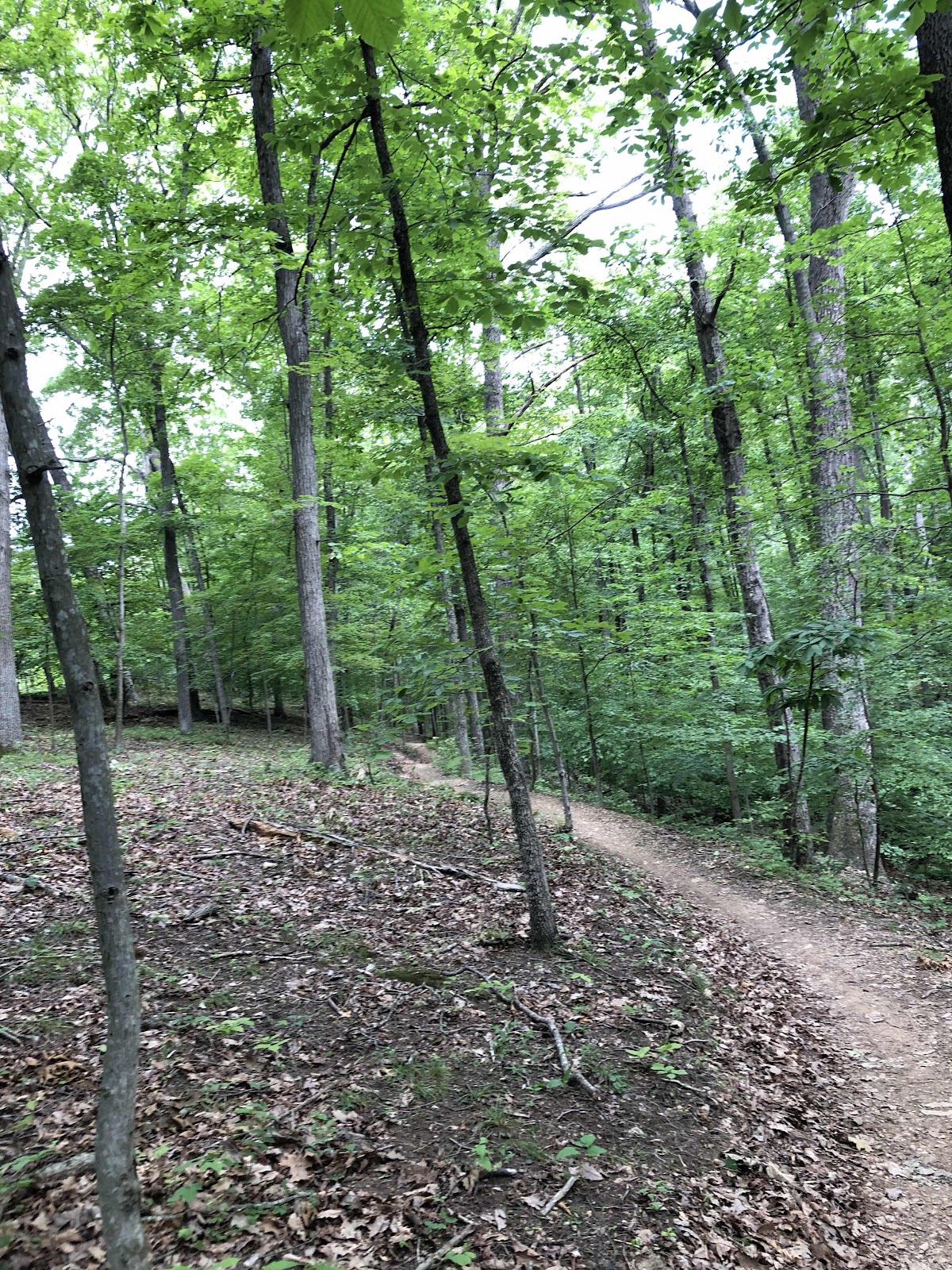 The ride wasn’t without trauma.  I decided to try a stream crossing and went a bit haywire and I had to put my foot down.  Right in the stream.  I lost my balance because there stream was...well...wet and slippy.   As I struggled to catch my balance my pants caught on the seat of my bike....rrrrriiiipppp!  From the inside hem up through the crotch and back down to the other legs hem was ripped clear through.  My thigh took a beating too!
A while later after crossing a stream (on foot) I went to get back on my bike and found some sharp wire that impaled my knee.   All the while  doing what felt like continually climbing.
Regardless I pushed on.  Finally we made it to the location where I had a meltdown last October    I was so proud of myself...but I was TIRED!   We kept going...on and on.  My heart rate was constantly high, my shoulder was hurting (nope, still not totally healed from this injury yet), my foot was still wet and I was dripping blood.  (Ok we had bandaid so I only dripped blood for a half mile or so). And then it happened, I started to focus on the fact that I was already wiped out and the ride wasn’t even half over.   We were still about 2 miles from the turn around point.  Ohh yes, this was an out and back ride!  I started to struggle more and more.  Admittedly I know that some of my issue was a mental struggle as I focused on the miles ahead of me.    Oh and have I mentioned that it seemed like this infernal trail was constant inclines?
At one point Jason remarked that I looked angry.  I just smiled through gritted teeth and kept riding.  You see, at that point I was about ready to lose my cool! Ok,internally I already had lost it!  But I didn’t want to disappoint him.  He really wanted to do this trail and I didn’t want to let him down.  Yet that blasted trail kept winding upward to the heavens. (Ok so maybe I’m being a big melodramatic...but we did have 1300 feet of climbing....have I mentioned that I weigh just shy of 250 pounds and that I’m not as fit as I was a few years ago? The trail was also never ending and hard for me!!   Ok, the climbing ended..I’m sure....but the turn around point was at the same mileage that I had been riding the last few rides.  In essence I would be doubling my mileage.  The shorter miles during previous rides had wiped me out....and here I was doubling my mileage overnight!  I was already wiped out and we weren’t even halfway yet!
The tears started.  Do you know how hard it is to climb a hill on your bike.....while your heart rate is beating out of control.....while you are crying? No,  you’ve never had the pleasure?  Well don’t!  It’s hard!!!
Finally I had enough.  I brought my bike to a screeching halt. (Ok my brakes don’t screech but you get the idea!). I  got off my bike as quickly as I could (without allowing my flapping shorts to catch on the seat...that’s harder to do than you think!).  I let the bike drop...right in the middle of the trail and wailed ‘I don’t like this stupid trail!’  I am sure I said a couple other things...but things were blurry at that moment.  I do remember jason saying ‘we are done...no more’. (Ha...we were five miles in...I wasn’t done...I had to get out off of that stupid trail somehow!).   I also remember him picking my bike up from the middle of the trail and moving it off the trail to a safe spot.  He also had me move to a safer place...not on the edge of a narrow trail right after a blind corner.  And that is where I sat for who knows how long.  Yes...I cried! 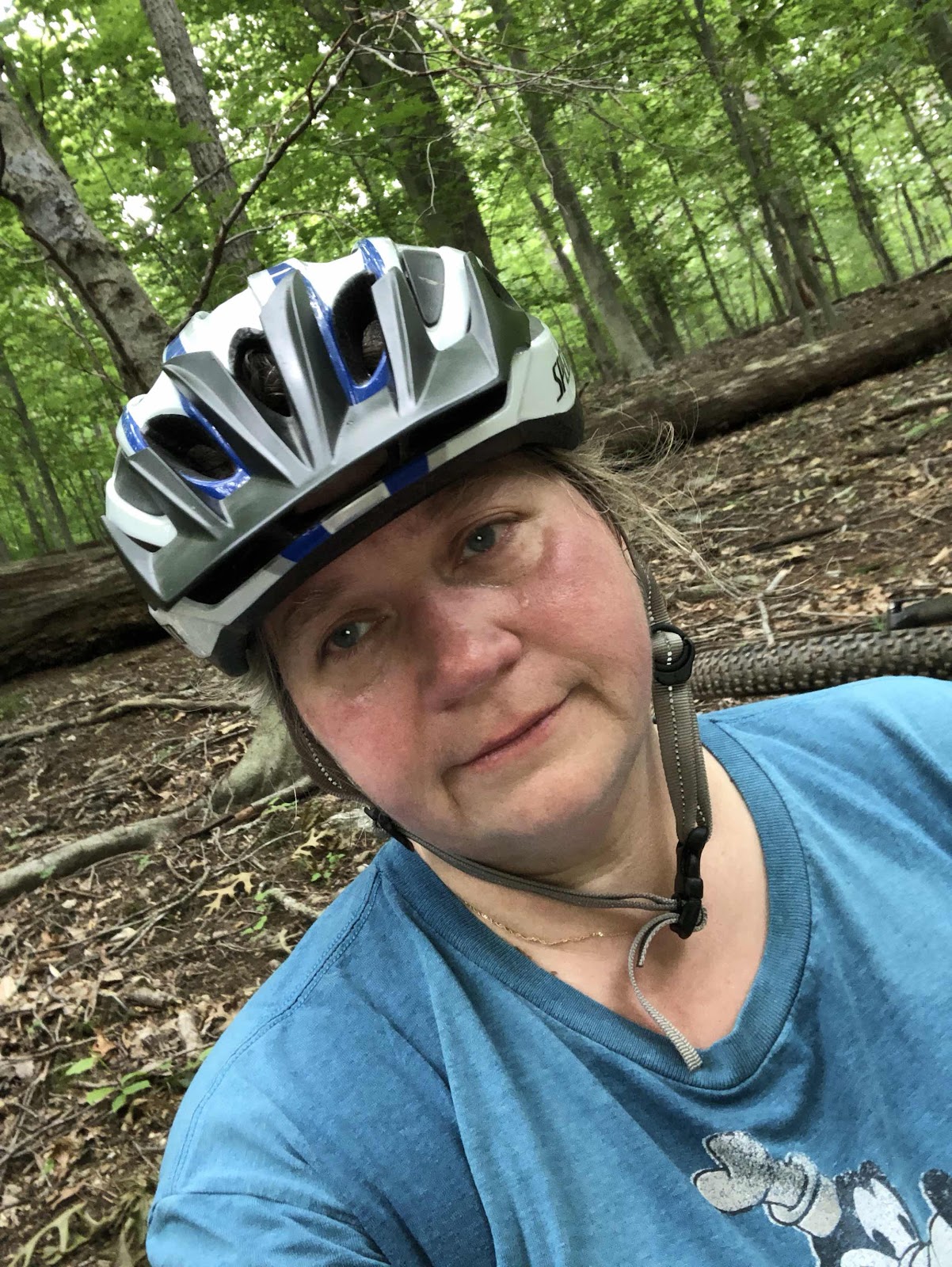 It was ugly!  Jason sat beside me the whole time....trying to make me laugh! 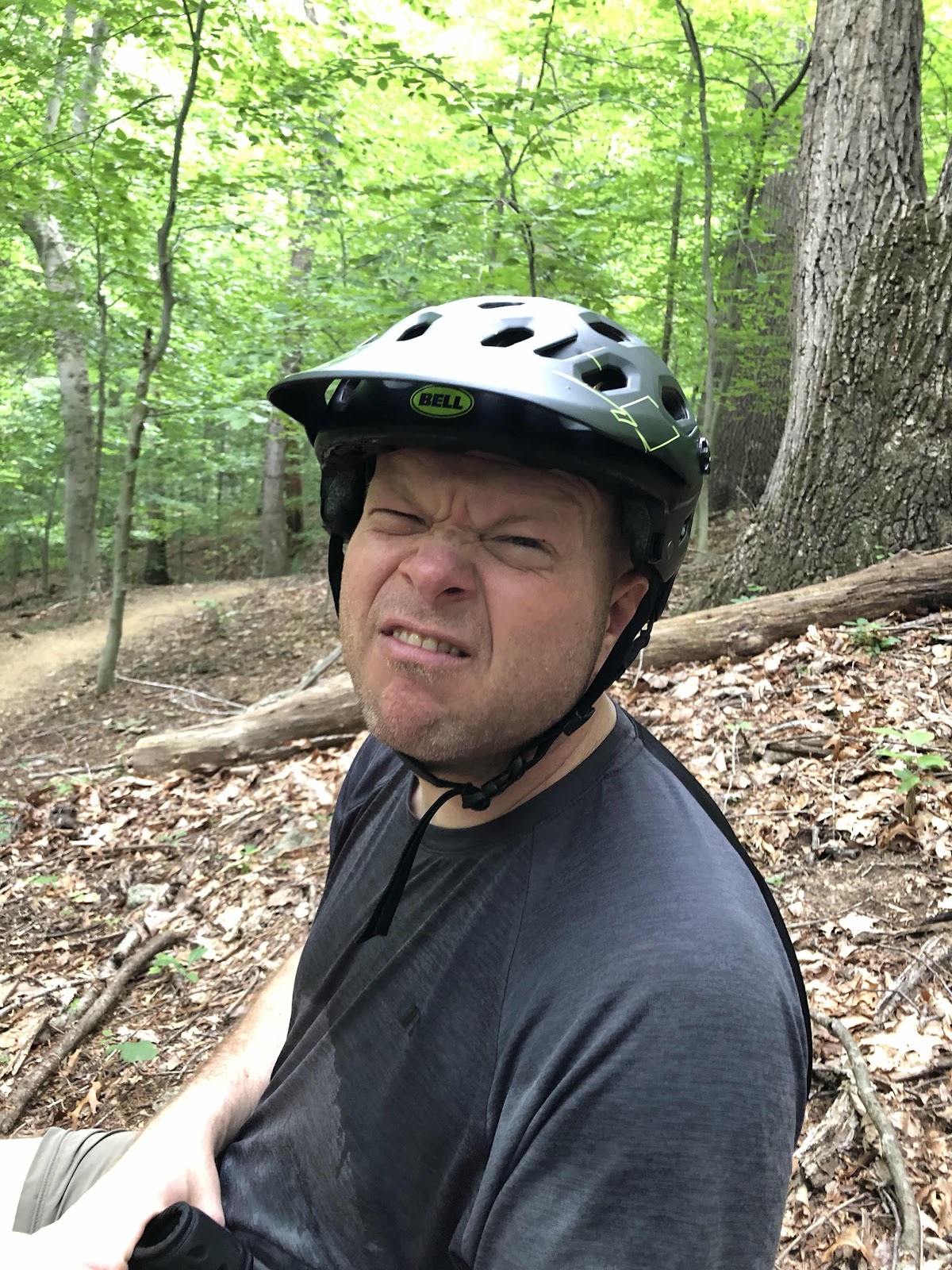 And he did succeed.   Even as I babbled about my wet foot, my torn shorts, my bruised thigh, my wound on my knee and of course the never ending climbing he had me laughing. 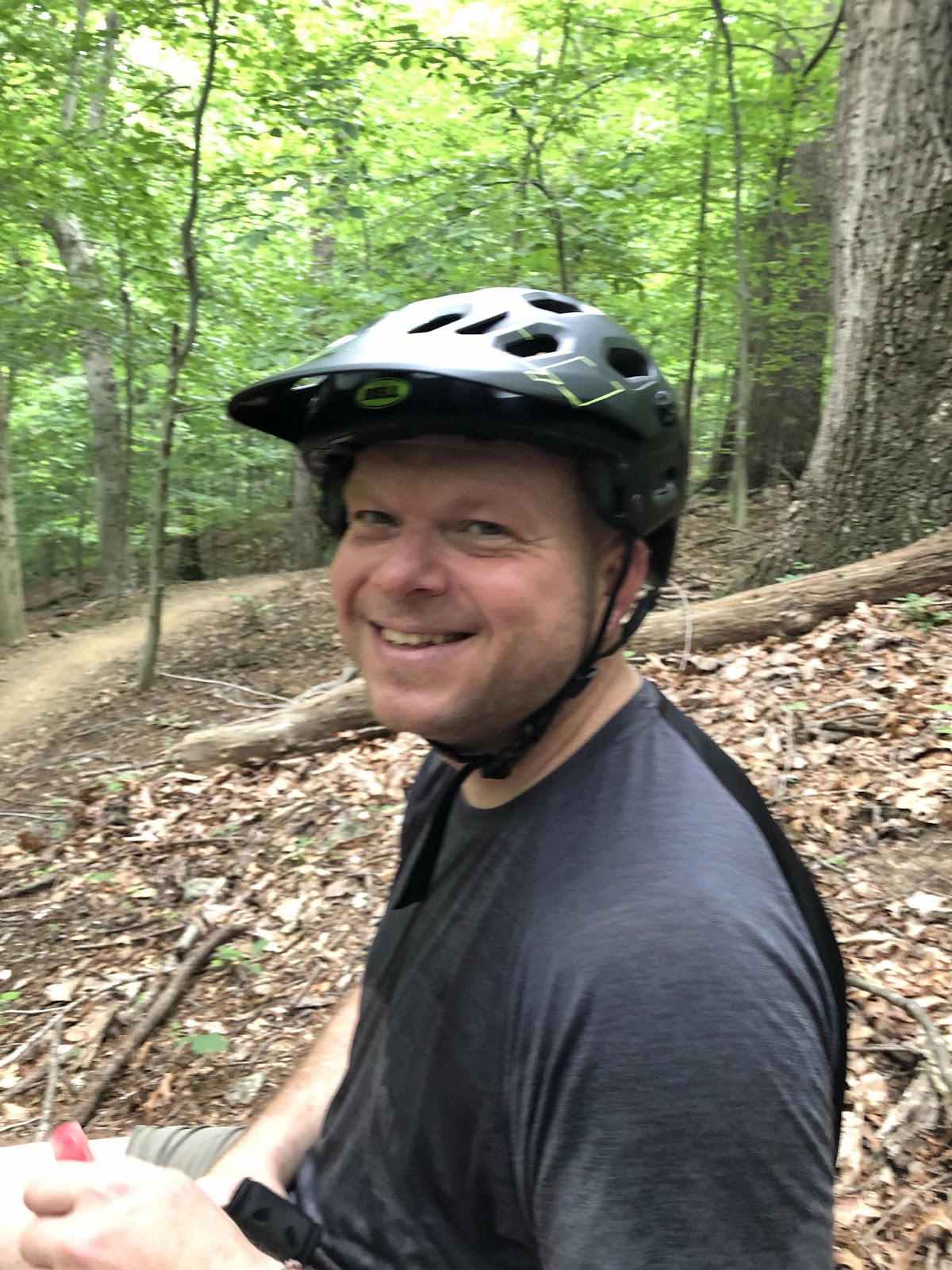 Yes I better put a good picture of him after his goofy one...just to prove that I have a normal man and not some weirdo!
Eventually I had to do it.  I had to get back on that bike and get myself back out of the woods and back to the car.  Back in October when I had my meltdown I pretty much totally walked out of the woods.  I was determined that I was not caving, I may have had a meltdown but I wasn’t going to let it totally decimate me!   I got back on that bike and I rode that blasted trail of tears back to the car.  Now don’t get too excited.  I did get off and walk about 3 times...for about 20 seconds each time.   And even while I was riding I was SLOW!  I wish I could /would have rode the whole way out...but I am very proud that I rode most of it!
The weekend was a good one.  Even with the trail of tears, it was good.   I was able to see my bike riding abilities very clearly this week.   Each time I ride I see a place to focus on and things I need to improve.  I can even see minor improvements.  I still fear the trail of tears.  It is my nemesis!  But I KNOW that I will conquer it!   I just won’t attempt the whole thing at at once...next time I will just make it my goal to get a half mile further before I cry!