Vacation Part One: The Beach

Welcome to the vacation recap...part one!   We had originally planned to spend the whole week down at the beach...the outer banks.   It circumstances changed (clean up from a hurricane that hit the Outer Banks) and we decided to spend a few days at a different beach.....day or two in the mountains....maybe visit to a Halloween attraction (field of screams) and then a few days of recouping at home.  (Recouping and preparing to go back to the grind of every day life.)

So here is  Vacation part one: The beach

We woke up relatively early and headed out to the beach.  It is about a three hour drive and we wanted to try to garner as much time at the beach as possible.  As we drove along the roads I was quietly contemplating the weather...overcast and rain.  Yuck!  I kept telling myself that the forecast was for sun in the afternoon!   We arrived at the ocean and the sun was shinning...but it was cold!   Where had the 85° days earlier in the week gone!  It was  only in the 50’s maybe low 60’s!  No worries...we like off season at the beaches just wear sweatshirts!  (Less crowds) And while we wouldn’t have been adverse to a swim in the ocean had the temps been conducive, we were not at the ocean for a dip in the water...well maybe just my toes at some point!!  We parked at our hotel at 11:00 but couldn’t check in yet as check in wasn’t until 4pm.  We had our bikes and there was no way we were leaving them on top of the car unattended...so the bikes came off the car and we headed off to explore Ocean City on our bikes.  Up and down the boardwalk we road.  We also road on the streets.  For over four  hours we road!! (Oh we stopped for a single slice of pizza from a boardwalk vender which we ate standing by our bikes). I hadn’t  ridden in weeks and my butt was starting to feel it for sure!!!  My legs not so much while riding!  We did stroll with our bikes down to the water for a few minutes. 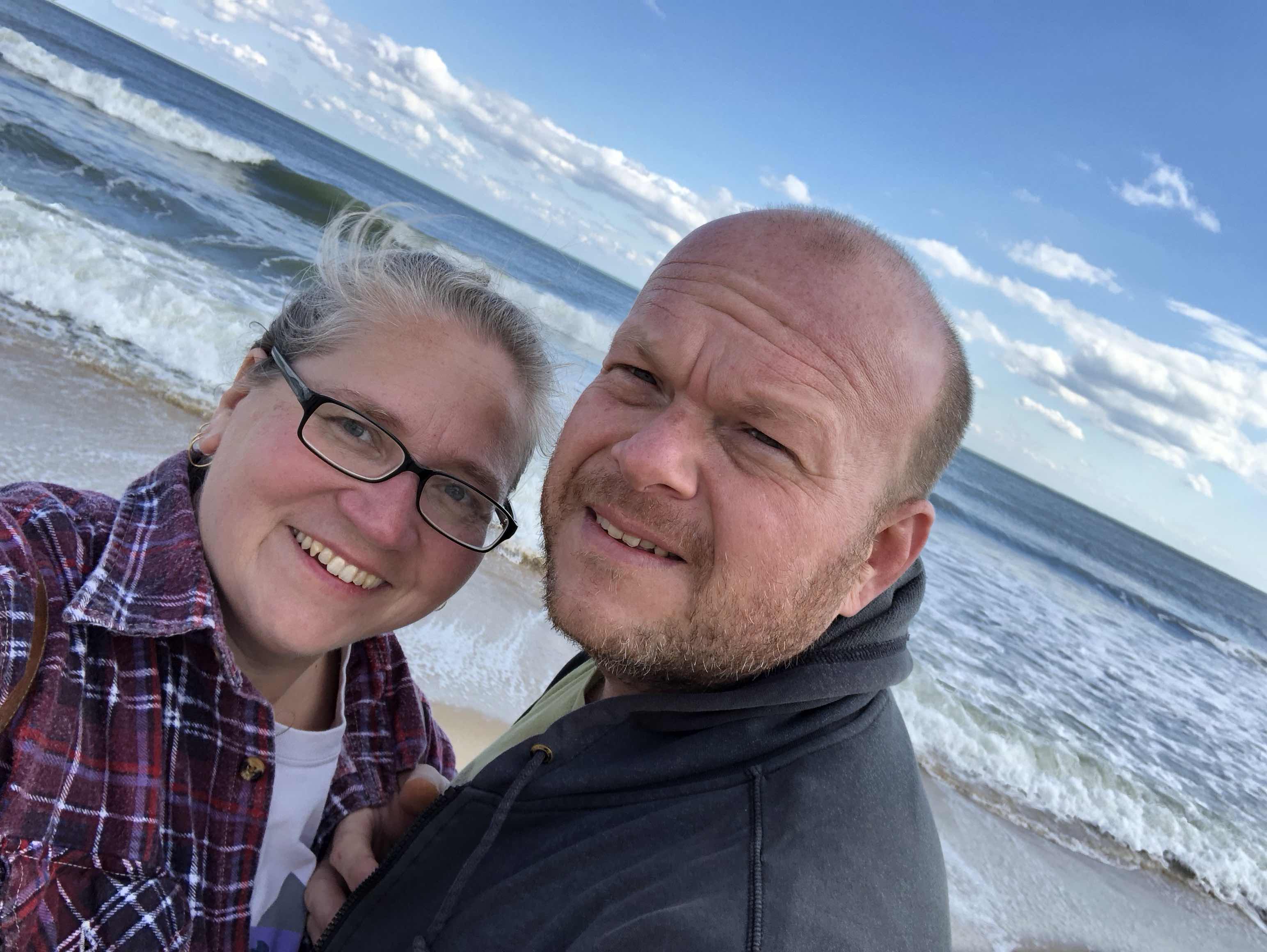 Finally at about 3 we went back to the hotel because they had advised that we might be able to check in sometime after 2pm.   Voila!  We were good to check in!!  We unloaded the car and relaxed on our balcony.  We may have even taken a wee nap!  What woke us up from our nap?  The loud revving of engines...and it sounded like it was coming from the ocean.   We headed out onto the balcony and by golly...it was indeed coming from the ocean...the ocean side of things. We had known that  there was a corvette show in Ocean City this weekend (we had seen parking lots full of vettes while we were out riding).  But apparently they were doing a parade of vettes down the boardwalk!  We watched for about 45 minutes  from our balcony. 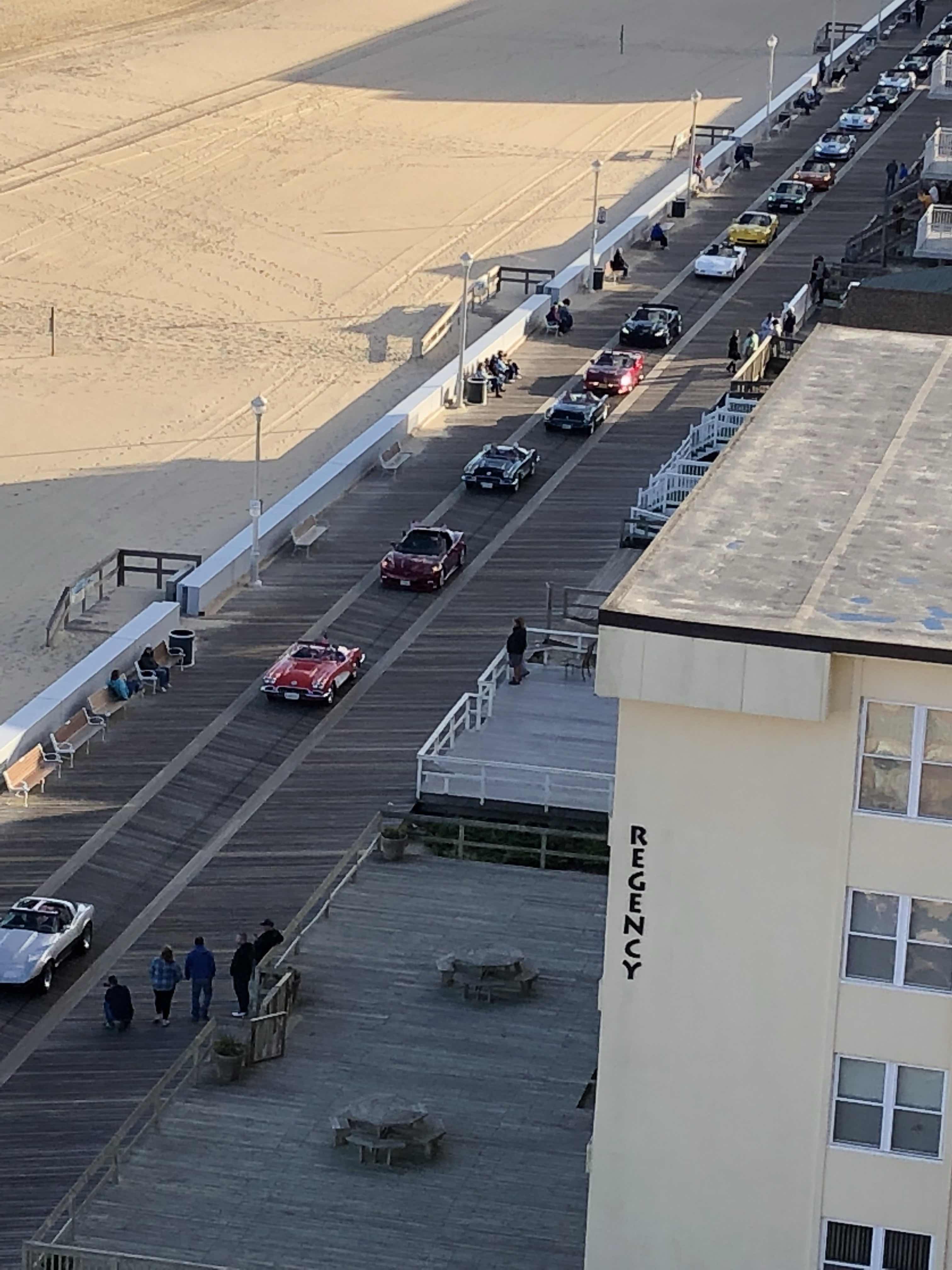 Time was ticking (we knew our dinner option was likely to close early) so we cut our viewing from the balcony short and grabbed our bikes.  Down the boardwalk we went...and thus viewed the vette parade up close and personal. As in we were right beside it!  We grabbed pit beef sandwiches and biked back to our hotel to have dinner! (Just for the record...the ride to buy dinner was about 2 miles there and 2 miles back so four miles of riding just to get dinner!).  We got ‘home’ and stayed in our hotel the rest of the night....spending lots of time on the balcony watching the sunset!!!! 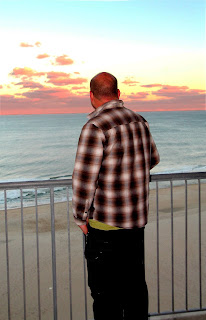 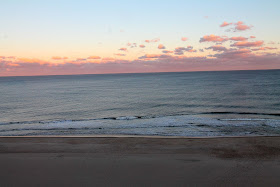 We were in bed early as we were tired and Jason was fighting a cold!

We had slept with the sliding glass door open and the heat cranked! (Both nights actually!)  It was fabulous sleeping!  I woke about 6AM and listened to the pounding surf and waited for sunrise.  At about 6:40 when the skies started to slowly pink up, I headed outside, wrapped in a blanket and watched the sunrise. 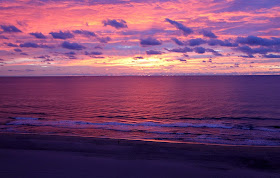 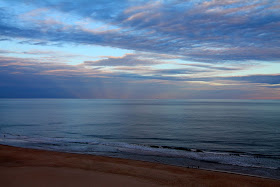 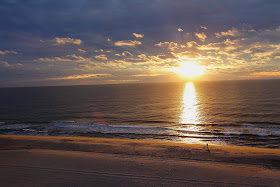 It was neat as I tried to get a picture of the different stages and colors of the sunrise!  We relaxed a bit in our room in the morning.   My legs were so stiff and sore and Jason was still fighting off the cold and feeling a bit rough and ragged.  But eventually we made our way out...on foot today.  (My butt may have been a bit tender from all that time in the saddle the day before!) Being  on foot and not having to worry about the security of our bikes afforded us the opportunity to shop!   We explored the many shops on and around the boardwalk...for hours!   We grabbed a lunch of Thrashers boardwalk fries....and a donut from the Fractured Prune donut shop.   Then we kept walking!!!  Jason found a pair of shoes that he has been wanting to find for 2 years (I kid you not...every time we go into a mall or any shopping expedition he looks for a certain shoe and a certain color.  He can usually find the color but not the style...or the style and not the color..). We walked into a shop and saw the exact shoe he wanted.  We both commented that they probably wouldn’t have his size...but they did!!!  AND while he was trying them on...the guy was like ‘end of season, I can knock 25% off of them !!!  Sold!  (We would have purchased them  at full price but a discount is even better!   I also bought a pair of shoes..but mine were 50% off!  Laden down with purchases we headed back to our hotel.  Ok, ok ok..we had also  purchased two big buckets of fishers popcorn (Amazon Affiliate link...because why yes...you can order a beach boardwalk treat delivered right to your house!!!), some chocolate covered strawberries for me and a caramel apple for him.   We walked a bit more later in the day after another much deserved vacation nap...but we were still wiped out!  Plus...I had somehow picked up a blister...most likely from a grain of sand between my toes...from when I took off my socks and shoes and waded into the ocean!   We spent time on the balcony overlooking the ocean and enjoyed the playful ‘show’ that the dolphins were giving!  Food...way too much.  But so tasty!!!

Day three
It was raining!!!!  Boooooo!!!  We spent most of the morning on the balcony talking and enjoying the beach views, sounds and smells.  Jason was feeling better, thank heavens!!    We had to check out of our hotel at 11 (we were so tempted to stay another night...but the rain deterred us....and the fact that we had other plans upcoming).  We hopped in the car and explored a bit further up the shoreline.  We spent some time in Delaware.  The sun actually came out for an hour or two...so we enjoyed the beaches and roads up there before heading home.  Sorry...only one pic was taken on this day...so you will just have to look at our sappy lovey dovey  picture!!! 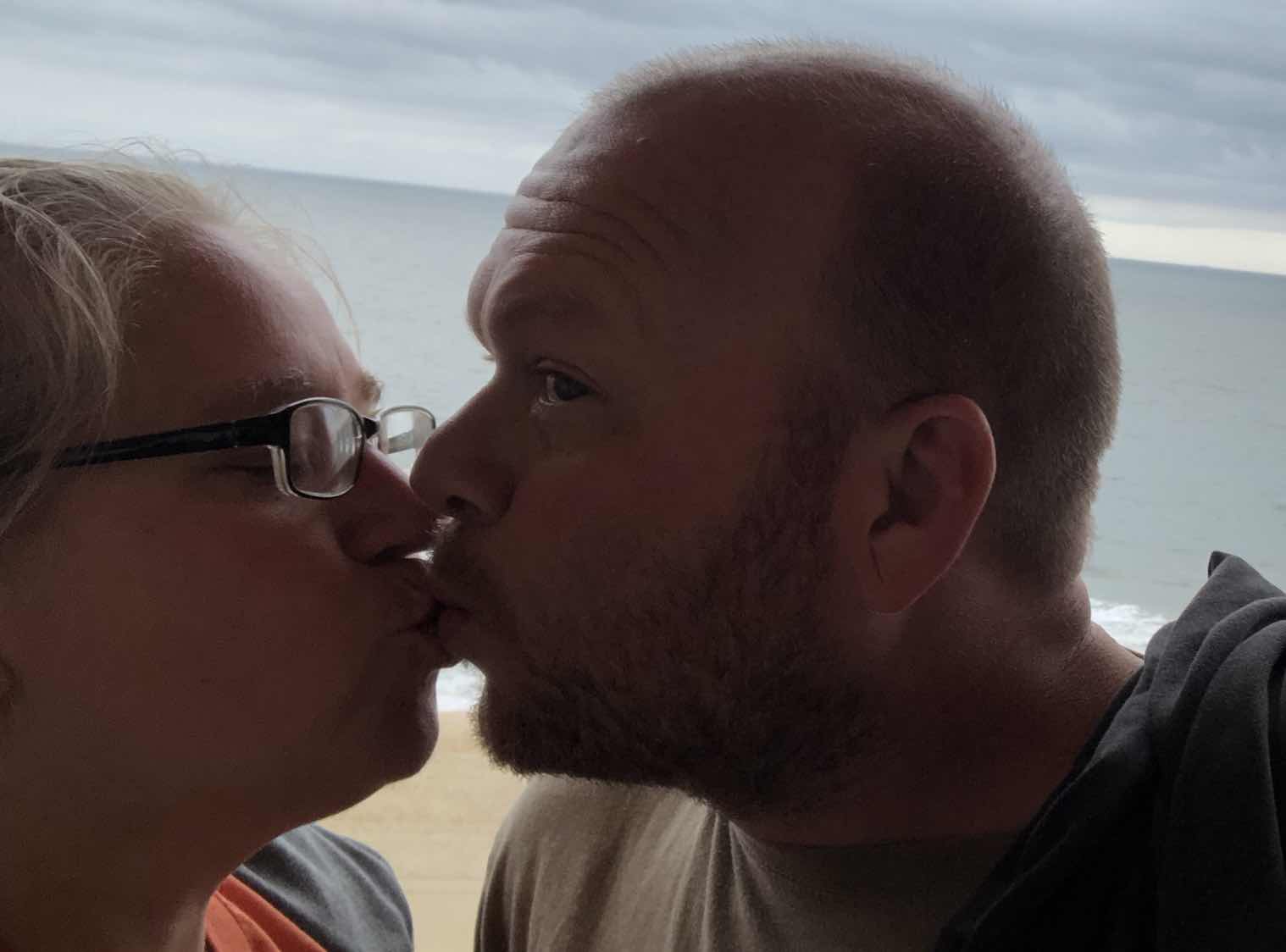 The trip home good FOREVER.  We knew to try to avoid rush hour...seriously, we drive it every day...we know!  But a small detour and a few extra stops and we found ourselves smack dab in the middle of rush hour...grrr!  Oh well...we were still together and we did make it home safe and sound!

Mertz, the cat was happy to see us!  We threw clothes in the wash...ordered dinner out...watched a little tv and I was out cold asleep early!

Take away from this portion of our vacation?   Since we decided to go to Maine next year for our vacation I have said I need to be in shape to really be able to fully experience and enjoy that vacation.....these few days of more than normal physical activity at the beach emphasized how much I do need to be in better shape before that week!!!  No time for sore muscles that week!!!!
MaryFran at 3:00 PM